Hover over each photo to view the original home and/or new home where applicable. 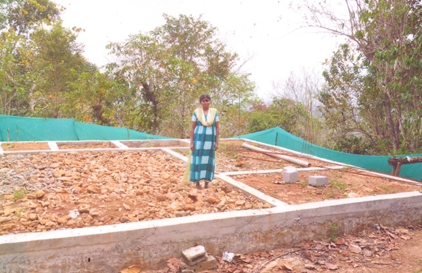 Celin Rajan belongs to St. Antony’s Church, K Chappath in Vijayapuram Diocese. Her family consists of 2 children and herself. Her husband left home eight years ago. Now she is living with her children.  Her son Jobin completed T T C (Teachers Training Course). Her daughter Joswini completed her graduation. Celin is suffering from different kinds of health issues. She was in the hospital for two months due to low sodium levels and was discharged recently. She has five cents of the land but no house. She has just started building but cannot go further because of financial problems.  She is asking for our help. 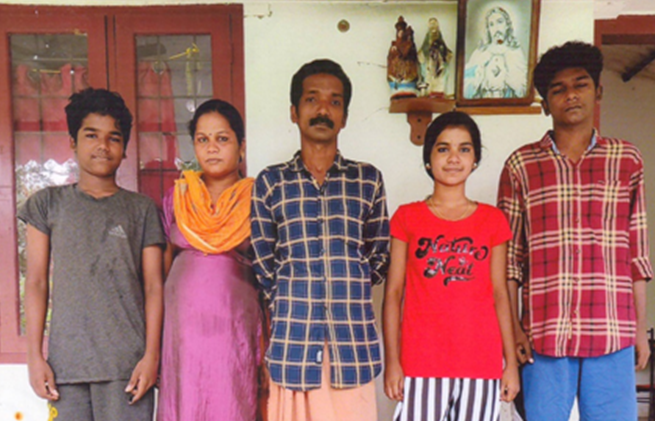 Devasia Joy belongs to St. Boniface Church Pattithanam in Vijayapuram Diocese.  Financially, his family is very poor. His wife Bincy is a housewife. They have 3 children. Eldest son Jibith is a 2 nd year student in I T I. Jiya, their daughter is in 10th standard. And the youngest son Jithu is studying in 9th standard. They have been living in a rented house for many years. Recently they purchased 3 cents of land.  Joy is the only earning member of the family. It is their desire to build a house but financial constraints block them from going ahead. 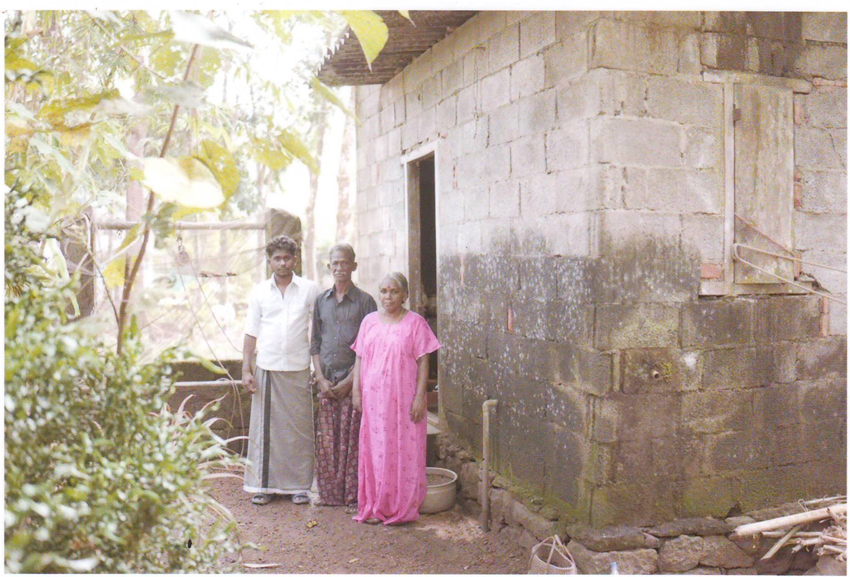 James belongs to St. Mary’s Church, Thellakom, Vijayapuram diocese. His family consists of his wife Annamma Joseph, his son Jithin James and a daughter Jeena James who is married. Financially his family is very poor. Mr. James is a daily wage laborer and his son Jibin James is a painter who could only complete his studies till the 11th due to his family situation. They are the sole breadwinners of the family who are struggling to meet with their meager income and his wife is a psychiatric patient who always needs a bystander to look after her. Moreover, James has played the keyboard in St. Mary’s Church for the past 50 years. Due to the Covid crisis, even his income from programs of social ceremonies was cut off. He possesses 3 scents of land and a small house. His house was almost destroyed during a storm in 2006 and during 2018 flood flooded the house and the floor was demolished. It is not in a condition of maintenance. He has a great desire to build a new house. But they don’t have a permanent source of income so he is asking for financial assistance to build a new house. 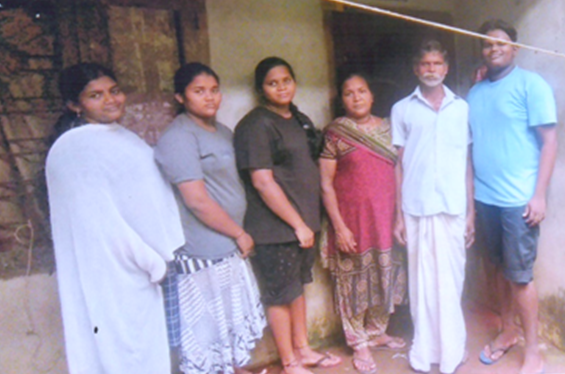 Kochurani belongs to Little Flower Church Elikulam in Vijayapuram Diocese. Her family consists of her husband and 4 children. Her husband is suffering from degenerative disk disease.  Kochurani also had a stroke last year and she is also suffering from various health problems. Their daughter Anumol completed her Nursing Assistant Course and is seeking a good job. The second daughter Aniemol is doing her degree course. Albin & Aghimol are twins. Albin is studying ITA & Aghimol is doing an Assistant Nursing Course. They have 3 cents of land with an unfinished house on it. Due to the financial crisis, they find it difficult to manage children’s educational expenses and complete their house. 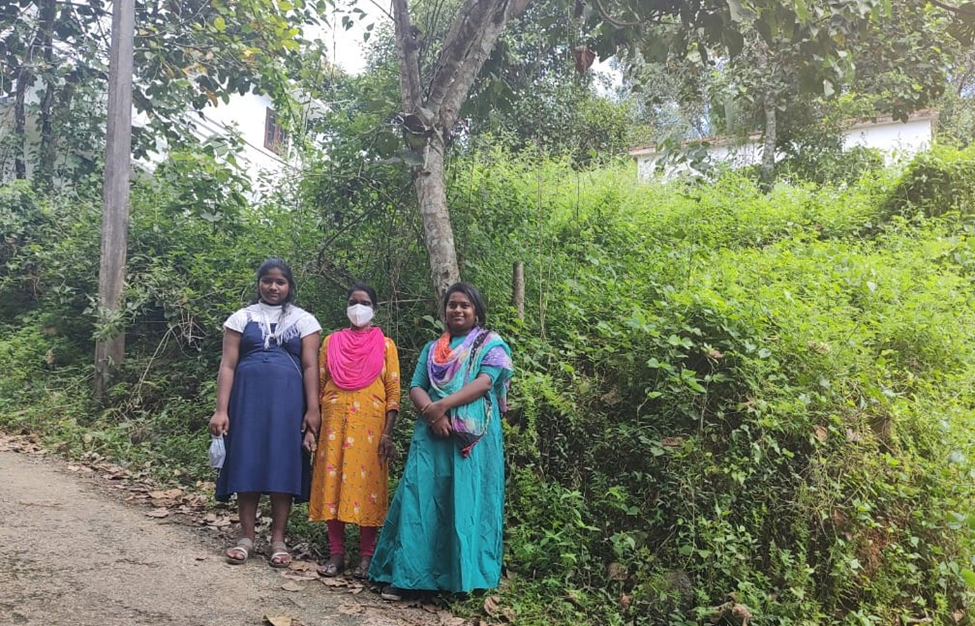 Omana belongs to St. Xavier’s Church Kanjirappara in Vijayapuram Diocese. Her family consists of 2 daughters and herself.  Her husband left them 6 years ago.  Omana, a forty-seven-year-old woman, lost her vision recently and she is under treatment. Her eldest daughter Anumol completed B.com 2 years back. But financial constraints block her from taking further steps in higher studies. Now she applies bridal makeup.  Despite the hardship, the family led a church-centered life. Anumol is a  leader of the Catholic Youth Movement. The youngest daughter is in 10th standard. Omana with her two daughters has been living in a rented house but the house owner forced her to leave the house as she is unable to pay the rent. They have five cents of the land but no money to build a house. Now they are seeking our help to build a house. 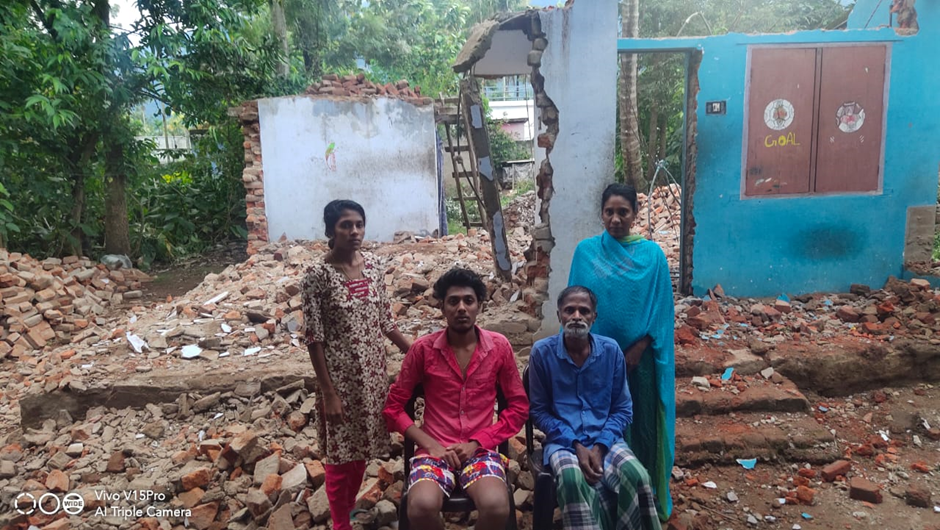 This is about Simon Antony from St. Jude Church Dhendicombu, He is mostly bedridden for 3 years since he had a stroke and needs help to stand and walk and can not really walk properly  He is unable to communicate even.   His wife Rita is a sweeper in a Village pre-primary school and she is the only earning member of the family. The Eldest son Abraham is also a patient suffering from spinal cord edema. He is also mostly bedridden and needs help standing and walking.  Daughter Alphonsa is studying for a B Sc, They own land but the house is uninhabitable. This needy family needs our help to build a new house. 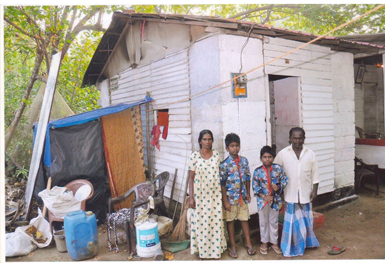 Chacko (Joy) is a parishioner of St. Peter’s Church Kumarakom in Vijayapuram Diocese. His family consists of his wife and 2 children. He is a casual (day) labor. His elder son is studying in 10 th standard and his younger son is in 7th standard. His wife Leelamma is a  homemaker.  He has 2 cents of land with a small hut on it. It is extremely difficult to live in this shed during the rainy season. Recently a big tree fell on the house and the house collapsed partially. Leelamma, Chacko’s wife, is assisting the parish priest with cooking and cleaning.  Fr. Dennis, our former director of VSSS, is the parish priest of Kumarakom St. Peter’s Church who she is helping. It is a deserving family. 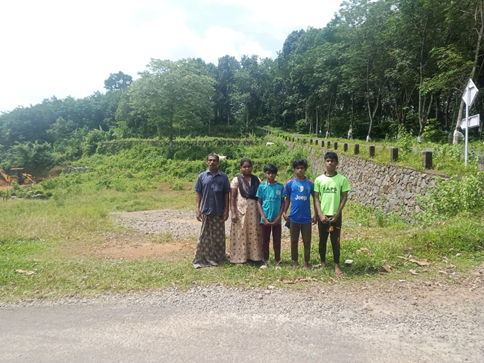 Lalichan belongs to St. Joseph’s Church Podimattom in Vijayapuram Diocese.  His family consists of his wife and 3 children. His wife Lovely is a homemaker. Their eldest son is a higher secondary student, the second son is in the tenth standard and the youngest son is in the eighth standard.  They have three cents of the land but they cannot construct a house by themselves financially.  They are very poor. Lalichan is the only earning member of the family. They have been living in a rented house for the last fifteen years.   He is asking for our help to build a house. 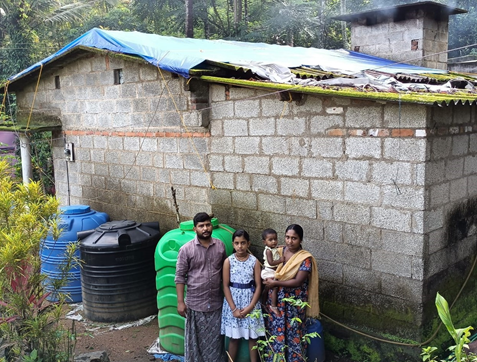 Girish belongs to St. Joseph’s Church Erumely in Vijayapuram Diocese. His family consists of his wife and 2 children. His wife Sandhya is a homemaker. The eldest daughter Dona is studying in 4th standard. The youngest daughter is a small kid. They have been living in a rented house for the last ten years. Recently he availed a bank loan and he could buy a plot with a small house in it.    But the house is a small hut. It is in a dilapidated condition. Its roof, floor, and walls are broken and damaged. They are afraid to live in this house with their small children. He has a great desire to build a new house. But he is not able to do it with his very low income. 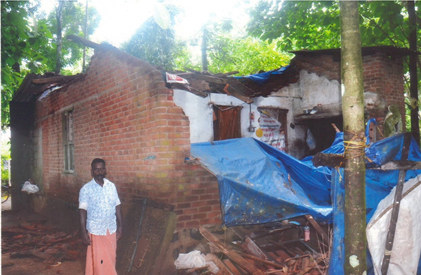 Biju K Y is the head of the family. He belongs to Mount Carmel Church Thiruvanchoor in Vijayapuram Diocese. Biju is a heart patient. His family consists of his wife and 2 children. The eldest son is studying in 9th standard and the youngest son is in  5th standard. Both are very clever students. Biju is a casual laborer. He is a victim of the 2018 flood.  His house got severely damaged. He would like to reconstruct his house but because of the financial crisis, he is unable. Seeing his pathetic condition his parish priest is taking initiative. They would like to reconstruct it before the monsoon starts. He asks for our help.